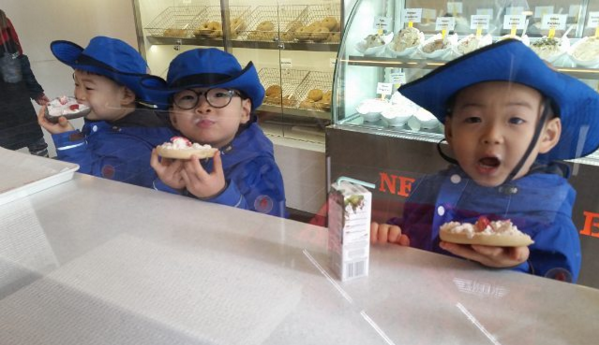 The Song triplets have turned their famous castle slide into their own private fort!
On the morning of March 6, actor Song Il Kook posted a photo of his three beloved triplets Daehan, Minguk, and Manse to his Instagram. In the photo, the boys are munching down on bagels at a bakery that they visited during their time on “The Return of Superman.” Song Il Kook writes as the caption, “Daehan, Minguk, and Manse came here with dad to eat bagels for the first time in a long time! (This is live~^^;).”
A couple hours later, he shared a video of the boys to his Instagram in which we see Manse peek his head out of a fort they’ve built out of their slide. Song Il Kook then bends down to capture the boys hiding inside, and Minguk giggles as he tries to block his view with his hand.
Song Il Kook writes as the caption, “They’ve started playing right away, maybe because they got energy from eating the bagels! Anyway, how could the three of them fit in there…? It looks like people from Mars really do love caves.”

"The Childe in China", Lee Jong-suk looking like a sniper in suit

Actor Lee Jong-suk, in his first work for tapping Chinese market, turns into a childe in the 1930s. Chinese TV series “Jade Lover” released the hero, Lee Jong-suk’s photos on set for the first time, to attract the line of sight. Photos of Lee Jong-suk in suit caught the heart of female fans. Showing off his forehead in comb over hairstyle, Lee Jong-suk, permeating with fresh, efficient and manly breath, interprets perfect gentleman style in a grey suit with a dark blue tie. Lee Jong-suk turns into Adonis when he lets his fringe down and wears a white shirt with a black tie, making his flawless fair skin stand out. Lee Jong-suk has started tapping Chinese market with “Jade Lover”, of which the production cost reaches 40 billion won. He is currently being filmed in China. The fantasy love drama, “Jade lover” is set in the 1930s. Lee Jong-suk, the hero, BaiLuohan, will develop a love relationship with the heroine on set, acted by young Chinese actress Zheng Shuang. This drama is published by DMG group, who participated in Hollywood blockbuster “Avatar 3”, “Iron Man” etc. It is expected to be on air this summer through China Tencent, iQIYIbroadcast and etc. “